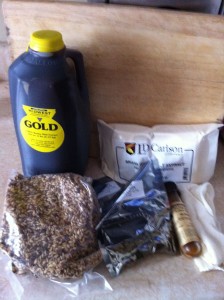 The first rule I have for brewing your own delicious beer at home is to enjoy the whole process. Give yourself enough time to complete every step properly. Rushed home brew usually equals a less awesome beer!

The basics of brewing great beer in your own kitchen are fairly simple. Steep your grains, boil your wort (pronounced “wert”), add hops, cool, add yeast and let the fermentation begin!

The basic ingredients in beer are water, grain, hops and yeast. Now, how these ingredients are combined, the temperatures at different stages, types of hops and when they are added and many other changes at any stage of the process will create changes in the final product. Why didn’t they teach brewing in grade school as a practical application of chemistry…I may have paid attention!

The first step in the process is to convert the starch found in the grains to sugar. This is accomplished by steeping the grains in hot water (mash) then rinsing the converted sugars through the grain bed (sparge). The resulting wort is then ready to boil. This step requires more equipment, time and space than the casual brewer (or married man) can afford. Hence, the beauty and convenience of the mini/partial mash process. The bulk of your grains have already been converted and reduced to a few pounds of syrup and about 2 hours has been cut off your brew time.

The next step is the boil. Ideally, for a 5 gallon batch, a good starting volume is about 7-8 gallons. Again, time and space don’t always allow for this, especially when brewing in NYC. 3-4 gallons is sufficient for the mini mash process. Hops….hops are a flower used for bitterness, flavoring and aroma in beer. Some beers add hops only once during the process while others introduce them multiple times at various stages. The exact same variety of hops can produce different characteristics in a beer depending on when they are added during the boil. In my opinion, they emit one of the most aromatic and fragrant scents that can come from a kitchen…no offense Moms! 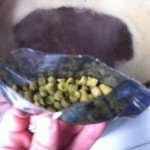 Once the wort has cooled to below 80 degrees, the yeast can be added or “pitched”. This is the only drag of home brewing….it will take at least 2 weeks from here until the beer is ready. 2 weeks of staring at a beautiful carboy filled with tantalizingly close liquid refreshment! The best way I have found to describe the fermentation process is that the yeast eats sugar, craps alcohol and farts CO2…and thus beer is made! 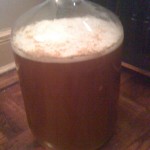 The bubbles means it's working!

After about 2 weeks of fermentation, all that is left is to bottle your beer and let it carbonate. A few ounces of corn sugar, boiled for 5 minutes or so and added to the bottling bucket will ensure that your beer is carbonated and ready to drink a couple of weeks later. This is called “bottle conditioning” meaning that the beer is aged and carbonated in the bottle, resulting in some sediment accumulating at the bottom of the bottle. Chill, pour in a glass and share with your friends! 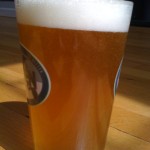 My very own lemon-coriander wheat.